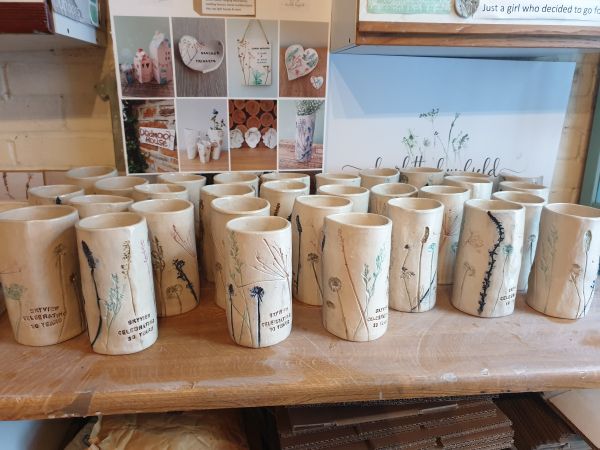 Back in August 2019 I was contacted by a lady who had purchased a bowl from me previously, for her Dad’s 60th birthday. She explained that her Dad loved the bowl so much, that they wanted to commission some work.

Two sisters work with their Dad in their family business, and the business was celebrating it’s 30th birthday later that year. They wanted to gift their employees something to mark the occasion (how lovely!), and wanted a quote from me for 25 vases.

After discussing the shape, colours and design the client liked, from looking at examples in my vase gallery, she chose a wild flower design where real flowers are used to impress into the clay. Personalised text was also to be stamped near to the bottom of each vase.

After a few emails back and forth, the client decided to go for 30 vases so that they had spares, and they also wanted each vase to be presented in it’s own box, ready to give as a gift.

Each vase started off as a rolled out slab of clay. The flowers were individually rolled in with a roller, then the slabs were cut to shape and left to stiffen a little over night before being constructed into forms.

Emelia was often out in the studio with me while I worked on this commission. Looking back at this photo of her now, I can’t believe how much she has grown 6 months later!

During my email conversations with the client, I thought it best to let her know that each vase may differ slightly in size and shape, and the flowers would be impressed differently around each one. In other words, each vase would be completely unique, no two would be the same. She completely understood this, and was happy.

Taking into account the shrinkage of the clay was important for this commission. I had already ordered the gift boxes (we went for a rustic kraft style box to suit my work), and I needed to make sure the vases fit perfectly inside the boxes. Above you can see a vase that has just been constructed to the left, a vase almost dried out in the middle, and a fired vase on the right. It still surprises me how much clay shrinks during each stage of the process.

Due to space limitations in the kiln, and needing to fulfill other orders at the same time, I made and fired the vases in three batches. Opening the kiln was always exciting – the first peek inside once the kiln was cool revealed an army of vases staring back at me on the top shelves.

I was a little sad not to have taken photos of the vases in their gift boxes, but here is the completed order, waiting to be packaged up and collected. Luckily for me, an engineer from the company was working nearby when the vases were ready for collection, so was able to pick them up and take them back to the company rather than having to send them with a courier.

It was safe to say that I had a lot more space back in the studio once this order was completed! I really enjoyed working on it, and it was really kind of the client to send me a photo of one of the employees vases filled with flowers after the vases had been gifted before Christmas.

The guys have dropped the vases back at the office and they are AMAZING!!! Thank you so much!

Thank you for all your hard work – we’re so pleased to have such a personal gift to share with our staff, many of whom have seen out much of the 30 years with us.“