I think I thought I was crazy at the time, but last December I booked a spur of the moment space in the newcomers gallery at BCTF with only 4 months to go until the fair. I like to think I am very organised, so my to-do list (which was never ending most of the time!) kept me on track. I didn’t have any samples of work in the collections that I’d planned to show, so I had to get all of these made and through the kiln in time, alongside keeping up with other orders and commitments.

As this was going to be my first ever trade fair, there were lots of other things to consider like pricing, how I would present my work in some sort of inexpensive catalogue, order forms, writing a press release, and how to make use of the fairly small space to display my work in the best possible way. 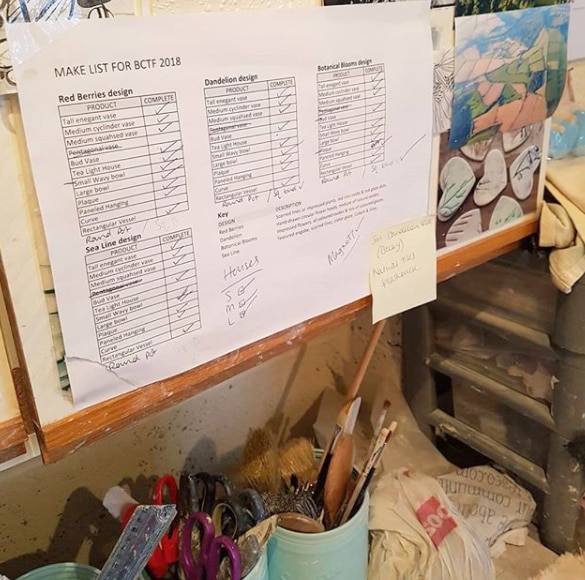 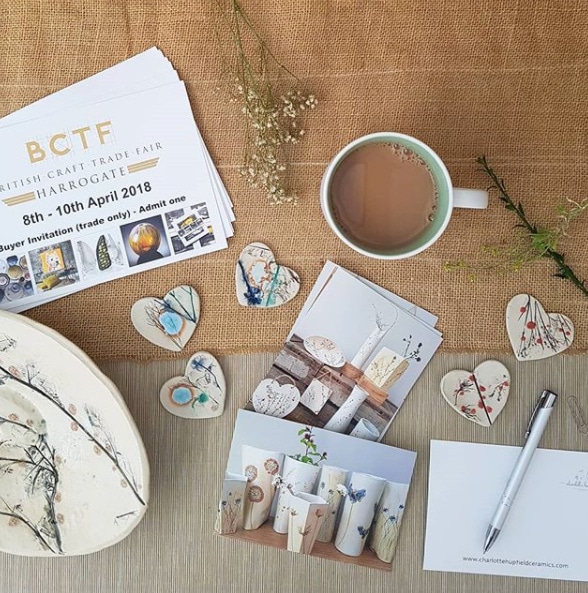 I can’t tell you how relieved I felt after completing everything and being ready with a few days to spare before the show. I was so excited and couldn’t wait to get to Harrogate and set up my stand, and start talking to buyers.

I was really lucky to have my husband with me who drove, which took some pressure off. We drove up on the Friday, checked into a hotel and enjoyed some nice food (and prosecco!). I wanted to be there the day before set up on Saturday, so that there would be no worry of getting stuck in traffic travelling up on the day, and not having to rush. The Yorkshire Showground was only a 5 minute drive from our hotel so we scouted it out on the Friday and had a look around so that we knew where we were going to set up. 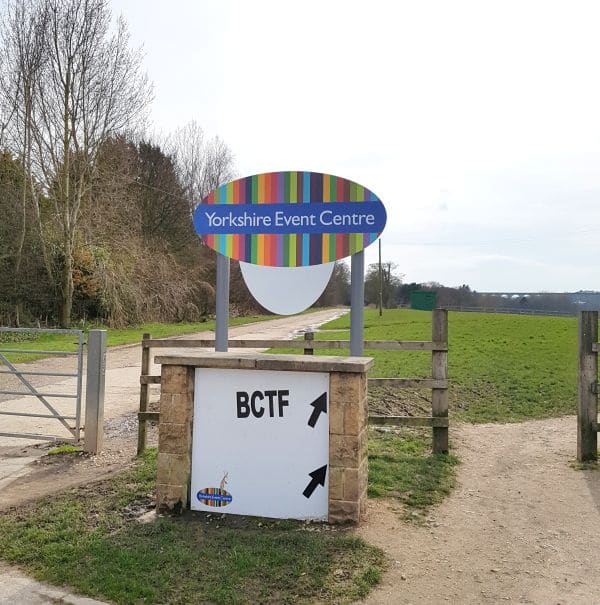 On the day of set up, we were one of the first in the queue so could park right outside the nearest doors to my stand to unload. I had practiced a mock up display at home and took a printed photo of the mock up so that setting up was quick and easy, remembering where everything was to be placed. It was surprising how much better the walls made the display look. 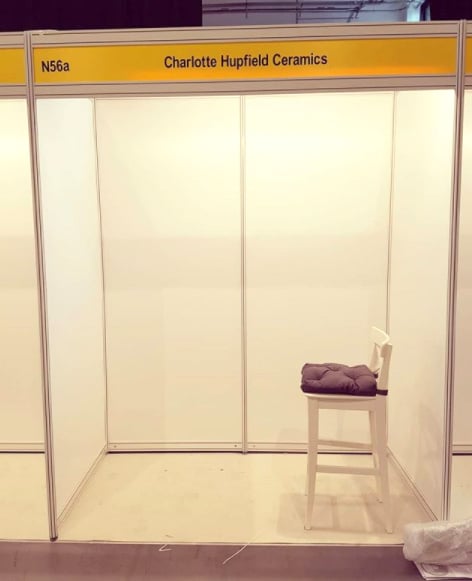 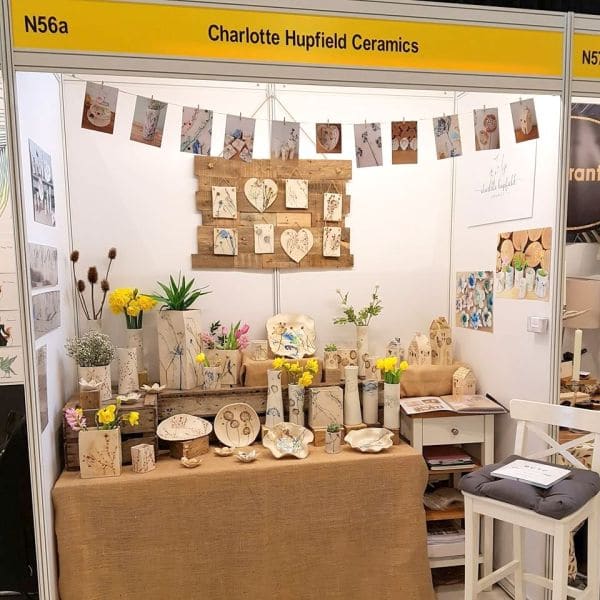 My top tip to anyone thinking about exhibiting at BCTF would be to try and get there early to set up if possible. Without trying to sound smug, when I had finished my stand there were a lot of others rushing around looking stressed which is what I wanted to avoid. In the afternoon we wandered into Harrogate for lunch and had a look around. What a beautiful place!

My Experience of BCTF

That night, and on the Sunday morning on the opening day of the fair, I started feeling extremely nervous. I think it was the unknown, having never experienced a trade fair before, and looking around at the high standard of all of the other displays – I felt a sudden burst of impostor syndrome, like I wasn’t good enough. I had also just started to get a sore throat which was typical.

At 10am there was an announcement on the tannoy declaring the first day of the fair open. I busied myself getting my price lists and notepad ready, and already there were buyers walking around. At 10:05am I was talking to my first buyer, a lovely lady who seemed very keen in knowing what she wanted, and put me at ease instantly. Within a few minutes of talking she asked to place an order, which was the point where I tried to act cool and calm, but was really doing a happy dance inside!!! The order process was easy thanks to the simple order forms I had created and printed. 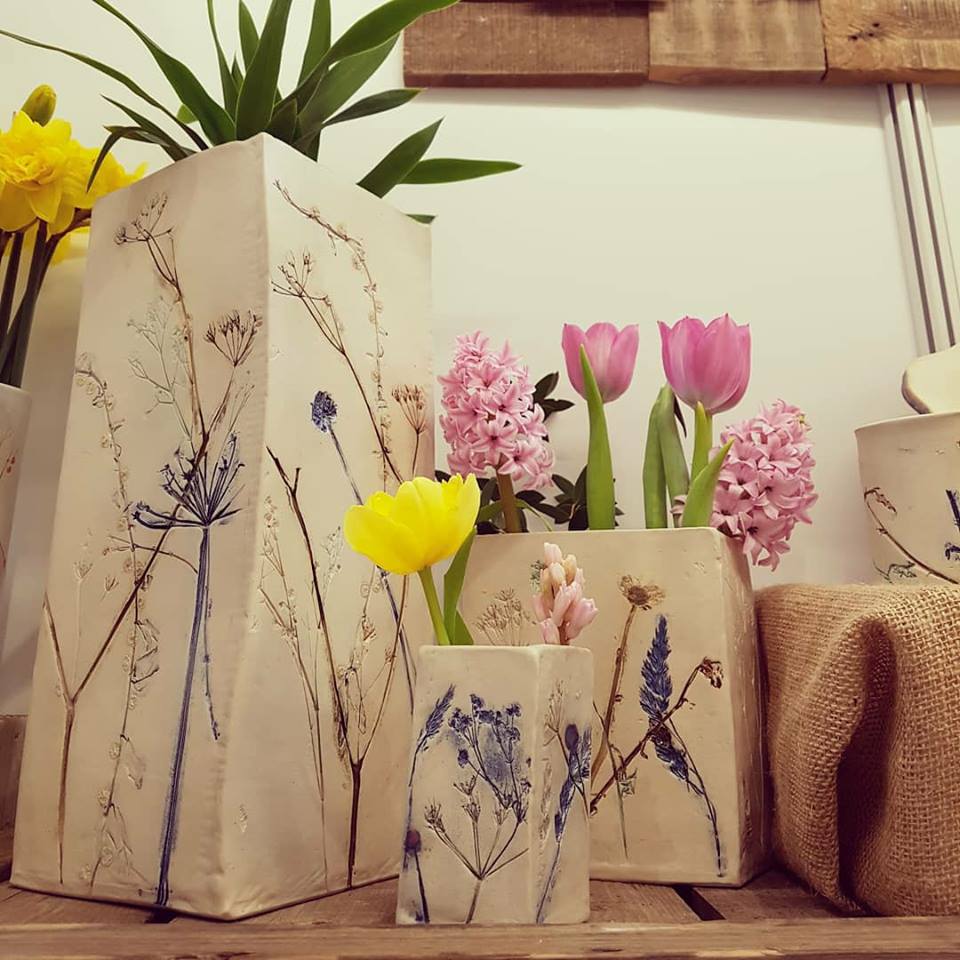 I had a few more orders that day, so my confidence had hit the roof by day 2. As soon as I spoke to the first buyer, the rest flowed and I realised I didn’t need to be nervous after all. It can seem a little intimidating at first, seeing the word ‘BUYER’ highlighted on peoples badges, but you soon get used to it. There are also some Designer-Maker’s allowed into the fair and I enjoyed chatting to some of them. 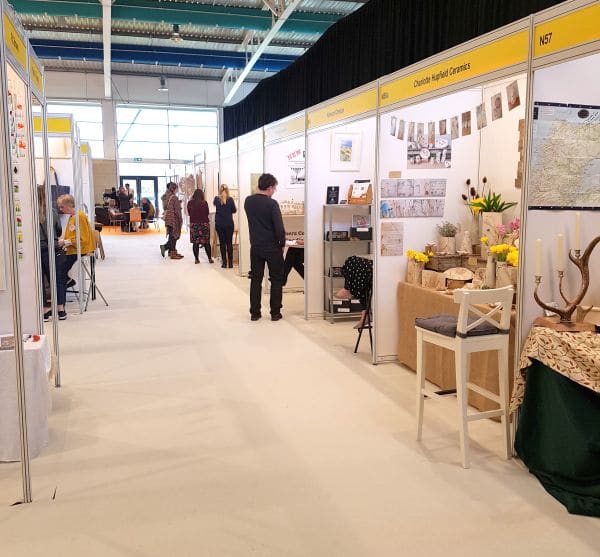 At the end of day 2 on Monday evening, it was time for the awards ceremony. Never in my wildest dreams did I expect to win an award. I was absolutely thrilled to have been chosen the Winner of the Award for Excellence by The Giftware Association.

Day 3 was the quieter of the 3 days, and by this point I had to extend my delivery times. The good thing is that most buyers understand the handmade process of ceramics, and are prepared to wait as long as it takes.

I’m now pleased to report that I am supplying my work to lots of lovely new stockists, all of which are totally different including galleries, smaller independent gift shops and garden centres in different areas of the country. I have also gained some other new contacts and friends.

Advice for other Makers

Try to get everything finished a few days before the event, to have some time to relax (and breathe, not hyperventilate!) before the show starts. This is a good time to reflect on what you have achieved, and hopefully you can celebrate being ready early.

If you have room, try and make space for some sort of stationary area to keep your price lists, catalogues, T&C’s, portfolio, notebooks etc neat and organised. I used the trolley from our kitchen which worked really well as it has shelves and a drawer, and I used the top surface area as additional display space. I also used a table with cloth over it for the main display which were things I already had so saved money, and the space under the table was really handy for storing things underneath like my coat.

The next bit of advice I thought I would share as it came from speaking to a buyer. All buyers have the opportunity to browse the online catalogue of makers and their work on the BCTF website prior to attending the fair, so they usually already know what sort of work will be on show, and what sort of work they are interested in looking at. Some buyers make a note of the suppliers they see online and add them to their ‘shopping list’. The buyer I spoke to mentioned that he wasn’t keen on suppliers doing a sales pitch as he walked past, trying to entice him into their stand. It may be different for some, but I remembered him saying that this approach wastes both his time and the suppliers time, because he knows what he is looking for and knows if a stand is of interest just from a quick glance. If you are reading this as a newcomer at a trade fair then from my experience I would advise to just look available and happy, and let the buyers come to you if they are interested.

Don’t be disheartened if you don’t get any orders during the show. If you hand out price lists and information to the buyers that show interest, make sure you ask for a business card from them and follow them up after the show as this could lead to potential orders later on. Many buyers just go to collect information to take away, and don’t place orders for weeks, sometimes months afterwards.